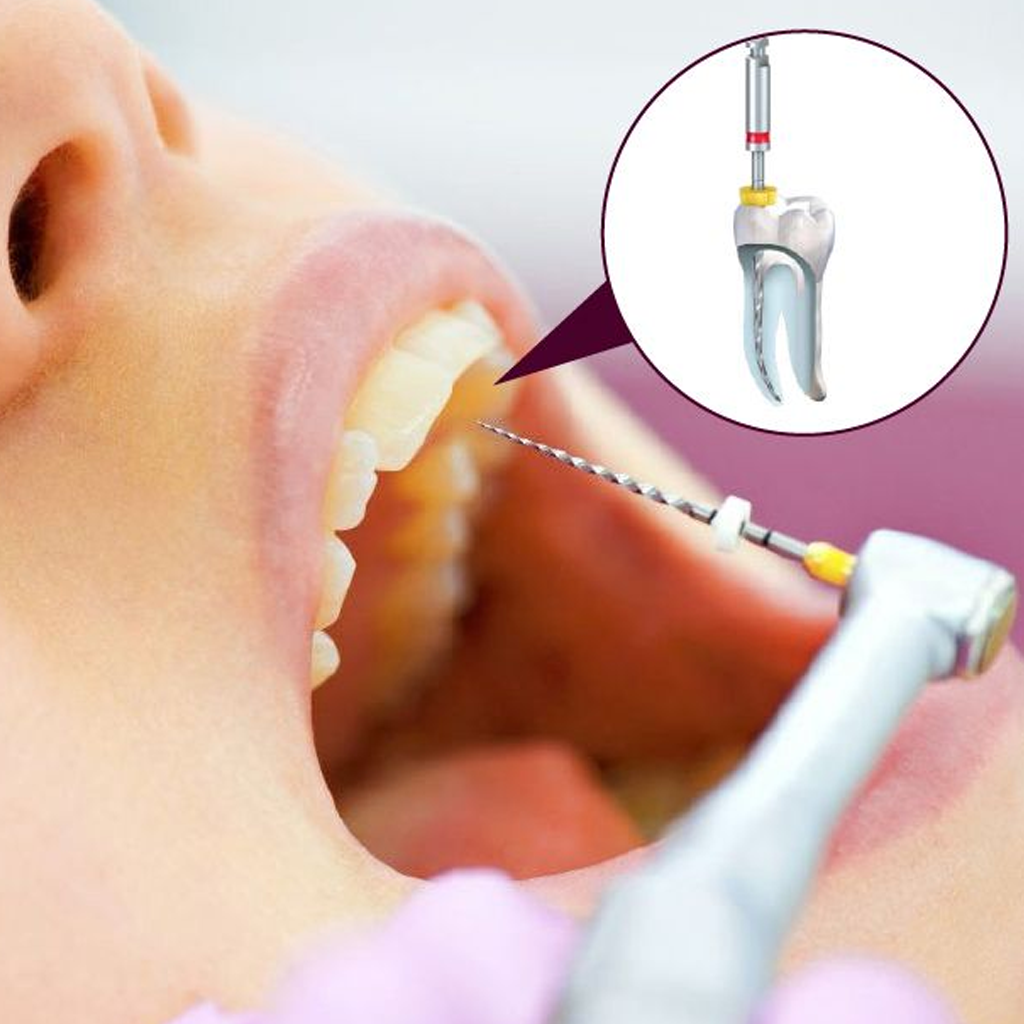 Nickel-titanium alloy was found in the 1960s. It was initially used for defense and security purpose. But as the years past, it was found that Nickel Titanium alloy or NiTi was also useful for other purposes like orthodontic wires, dental burs and k-type root canal files. Around the year 1993, NiTi rotary files was introduced to the market. The rotary files that were introduced earlier were designed with cross-sections that did not have cutting edges but rather broad radial lands. This was different from the traditional K-file that which had triangular in cross-section with sharp cutting edges. Those rotary file had 16 mm long cutting blades and had greater taper than the k-files which had 0.02mm taper.

Over the years, various research reports were published, which provided detailed description on how NiTi Rotary files proved beneficial and successful in conducting endodontic treatments. Even so, the use of rotary files requires attention to detail in how they are manipulated. Various guidelines were  outlined by various dental associations and councils. There were reports that showed not all root canals lend themselves to rotary preparation, due to varying degrees of clinician skill and case complexity. Furthermore, rotary files may fracture rather unexpectedly or create procedural errors.

Therefore, knowledge of several clinical “Golden Rules” and basic understanding of metallurgical properties of NiTi rotary files are critical for successful use. There are more than 30 NiTi instrument systems are available in the market.

There are more than 30 NiTI Rotary systems available in the market. They all have different design, shaping characteristics, breakage potential and clinical performance. Manufacturers place great emphasis on various NiTi rotary design details but only two major factors have been identified that impact shaping potential—cross-sectional design and tip configuration. All currently available rotaries have noncutting tips, but some have radial land areas while others have a nonlanded design. Generally, radial lands make preparation slower but safer while a nonlanded rotary cuts more rapidly, but can also lead to preparation errors. When used according to their specific guidelines both types of rotary files perform well.

How to avoid perforation or prevent fracture?

NiTi is an alloy which has two crystal structures, austenite and martensite.There will always be transitions from one crystal lattice to the other. This enables NiTi to be superelastic and also gives shape memory. The high flexibility and elasticity helps in reducing the force between and file and canal wall during instrumentation. This results in the file remaining centered in the root canal space, and in a lower propensity towards canal straightening or other preparation errors. Secondly, rotational movement in curved canals will bend rotary files once per revolution. This ultimately leads to work hardening and brittle fracture, also known as cyclic fatigue.

Its high flexibility is critical for rotary endodontic files for two reasons. With highly elastic instruments, forces between the file and the canal wall during instrumentation are reduced. This results in the file remaining centered in the root canal space, and in a lower propensity towards canal straightening or other preparation errors. Secondly, rotational movement in curved canals will bend rotary files once per revolution. This ultimately leads to work hardening and brittle fracture, also known as cyclic fatigue. Clinically, deformation and fractures of endodontic files do occur. But research proves that rotary files are fractured much lesser compared to stainless steel hand files.

However any tooth with a file fragment or broken file piece lodged in root canal might be problematic in future. Hence perforation or fracture prevention is very important. If rotary files are broken or perforated in canal, it is always a good and honest practice to inform the patient.

There are two distinct fracture/perforation mechanism in all research and several torsional load and cyclic fatigue. Torsional load is transferred into the file through friction against the canal wall while cyclic fatigue occurs with rotation in curved canals. Both factors work in concert to weaken the rotary file. Torsional load is transferred to the file due to the friction between the file and and canal while. Cyclic Fatigue happens due to rotation of the file in curved canals. Both factors are reasons for file breakage. As a general rule, fine and flexible files are vulnerable to torsional load but are resistant to cyclic fatigue. Conversely, more rigid and larger files can withstand more torque but are susceptible to cyclic fatigue. The greater the amount and the more peripheral the distribution of metal in the cross section, the stiffer the file. Therefore, a file with a greater taper and larger diameter is more susceptible to fatigue failure; moreover, canal configuration becomes important here. A coronal root canal curvature is more dangerous than an apical one in terms of fracture, and a very acute canal curvature generates more fatigue than one with a larger radius. NiTi rotary usage should be learnt from an expert rather than self education using extracted teeth. There are several courses and training programs conducted by several doctors and manufacturing companies. It is essential for any fresh user to start in slow and phased manner. One such training program is conducted by Indian company called Healix (https://www.dentaldeal.in/products/endomotor). They provide complete handson training program with their specialist on how to use rotary instruments and avoid file breakage and perforation in all types of canal.

A clinician’s skill and file-handling parameters are directly related to success with NiTi rotaries. Two reasons for this are the importance of proper case selection and the manual dexterity required for NiTi rotary use. There are specific guidelines for file sequences that are provided for specific rotary instruments. But majority principles apply to all instruments. Primary example of this is using lower rotational speeds (about 250 rpm) to reduce file breakages and perforation. Most file manufacturers provide guidelines for their products. However these recommendations may be incomplete or clinically insufficient. Whenever there is doubt, dentist should consider expert opinion preferably from an endodontist. Most companies recommend that rotary files should be used until there is slight resistance. But recommendations differ regarding exact hand movements. Most rotaries are used in gentle pecking motion, some of them are used continuously advanced motion and shaping files should be used in brushing motion.

It is difficult to determine exactly the apically exerted force in the clinical setting but manufacturers stress that a very light apical touch is needed. Currently all Endomotors come with preset programs to set torque and speed for several files. Hence file perforation will reduce. In order to reduce friction it is essential to use lubricants like EDTA or any equivalent lubricant which also help as antibacterial. These lubricants are beneficial for the rotary files. Using NaOCI also helps in reducing the torque and also acts as disinfectant. It is therefore important to use sufficiant irrigation with NaOCl during the use of rotaries.

Thus it is essential to have proper process of cleanining and sterilization of the file. Thermal sterilization does not affect fatigue life or torsional resistance. However, the reuse of rotary files has to be closely monitored in order to avoid build-up of fatigue over time and NaOCl-related corrosion.

How to prepare quality canal with Rotary Files

Current research have shown that Niti files promote excellent canal preparation. Research has also proved that gross preparation errors have been reduced. The current technique of choice to demonstrate canal shapes before and after preparation is microfocus-computed tomography, also know as microCT. Canals with wide oval- or ribbon-shaped crosssections present difficulties for rotary files, and other techniques, such as circumferential filing and ultrasonics, are sometimes used in those canals. Oscillating files that have been recommended for these canal types do not perform as well as NiTi rotaries, particularly in curved canals. The curved canals require Control Memory Niti Files.

Changes in root canal paths with NiTi rotary preparation are usually very small. This indicates that canal walls are not excessively thinned and apical canal parts are only minimally straightened even when preparing curved root canals. Rotary files with a radial-landed design prepare canals in a planing action and need to be advanced with light pressure in order to engage the perimeter of the canal and then cut the dentin there. Usually, these rotaries enlarge the existing canal path safely without creating procedural errors. Nonlanded rotaries prepare canals with more of a cutting action; their blades can be used with a lateral movement towards a specific point on the canal perimeter. This allows the clinician to actively enlarge and relocate canal paths, for example, away from the furcation in the coronal and middle root canal thirds. Nonlanded rotary files are considered more efficient but require more operator skill to avoid procedural mishaps compared to radial-landed files. An important design element of all current instruments is a passive, noncutting tip; it guides the body of the rotary file so that dentin is cut more circumferentially. Even when taken beyond the apical foramen by accident, radial-landed rotaries will not engage and create an apical zip formation due to their passive reaming action. However, actively cutting files should never be used long to avoid the occurrence of apical zipping and perforation.

Clinical Strategies As stated before, excellent diagnostics including the exposure and analysis of adequate radiographs are important for successful rotary canal preparation. Dentists need to carefully check root anatomy as well as the existence, extent and position of canal curvatures. Additional radiographs and findings during the treatment phase usually help to determine canal dimensions, curvatures and merging points, which can all predispose rotary files to fracture. Each NiTi rotary system has a specific, optimal way of use that should be learned in a quality CE course. Following are a few general strategic principles to help the practitioner safely and successfully use NiTi rotaries:

Root canal preparation with NiTi rotaries is a very effective and safe procedure. However, it demands understanding of root canal anatomy and the usage principles of the selected rotary system. Every canal needs to be evaluated on its own merit regarding length, width and curvature. It is only then that an educated decision about the strategy for the preparation of that particular canal can be made. NiTi rotary usage also requires training provided in quality CE courses. Following the guidelines outlined above allows clinicians to successfully prepare most root canals using nickeltitanium rotaries.

Shop for the best dental products in the market at the lowest rates and learn about the news in the dental world.